Note:  Some of the spellings may be wrong ~ handwriting hard to read ~ deciphered as best as possible.

By motion and order was drawn to the amount of $3.50 for finishing of furniture and painting signs.

Mr. Charles M. Weaver was duly invited into the mysteries of our order.

By various motions the secretary was instructed to correspond with headquarters as to whether we dare admit members at $1.50.

Bro. G.K. Miller was Chaplin for the night and Bro. Swartwood was sentinel.

Bro. Shaffer moved and Bro. Swartwood seconded that we accept Bro. John Rhine’s offer of $4.00 for wood for 1 year.

It was regularly moved that we pay Bro. W.C. Caris ten cents each for the 3 plates lost at convention.  Motion carried.

By motion the delegates for the District Convention to be held by Camp 195 on November 30, 1901 were appointed:

Herbert Stover was a teacher, a historian and an author.  He was the second son of Adam Kahl Stover and Jessie DeLong Stover.  His great grandparents were Peter and Sarah Kahl.  As a boy he and his brother, Leslie, worked in the fields around Brush and Sugar Valleys.  He received his teacher’s education at Lock Haven and Bucknell, and taught in schools in Huntingdon, Flemington, Lock Haven, Phillipsburg, Austin, and Lewisburg.  His first book was a textbook, published in 1945.  His first novel was published in 1947, Song of the Susquehanna.

He also wrote MEN IN BUCKSKIN, POWDER MISSION, COPPERHEAD MOON, THE EAGLE AND THE WIND, and BY NIGHT THE STRANGER.

Much of the planning of his books was done while he hunted and fished in Sugar Valley.  There history came alive and he walked in the moccasins of his ancestors.  There the water and the woods talked to him, and he listened, and remembered, and came home to write again.  To write and rewrite and, to research and study and remember old stories he heard as a child. 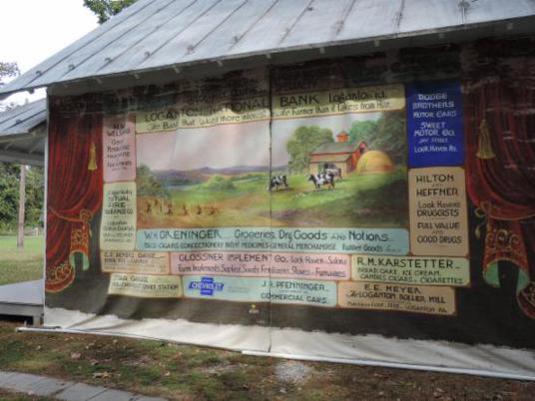 A large oil cloth mural advertisement which we think once hung in the movie theater (in the now Loganton Bank) many years ago was donated to us.  Here it is hanging on display at the museum in September.

Dedicated to the preservation of historical significance of Sugar Valley

and the central Pennsylvania area.