Many years ago, the White Deer and Loganton Railway ran between Loganton and White Deer to carry lumber and mail.  Excursion trains were operated on special days, one being a trip to Tea Springs for a day of picnicking and gathering tea.  Tea Springs is located at the far eastern end of Sugar Valley just across the Clinton County line in Union County.

This area was once known for its abundance of tea that grew near the spring … hence the name Tea Springs.  John Duncan’s White Deer and Loganton Railway excursion train carried families to this spot for picnics and musical entertainment at the band pavilion from approximately 1907 until the railway shutdown in 1916.  Soon, however, the tea was over picked and became extinct in that area.  In 1933, when the Civilian Conservation Corps (CCC) was formed, it then became the site of the    S-114 Tea Springs Camp.

Men rode the flat cars equipped with railing and benches. Women and children rode inside.  The company even had a pavilion, a band stand and a refreshment stand for the convenience of the picnickers.  The tea that was picked in late summer was a sweet golden rod which had the aroma of Anise or black licorice. It was said to be a good tea to settle an upset stomach. The tea was over picked and eventually became extinct in this area.  All the buildings and train travel are gone now, but there is a picnic area maintained by the Pennsylvania Department of Conservation and Natural Resources. 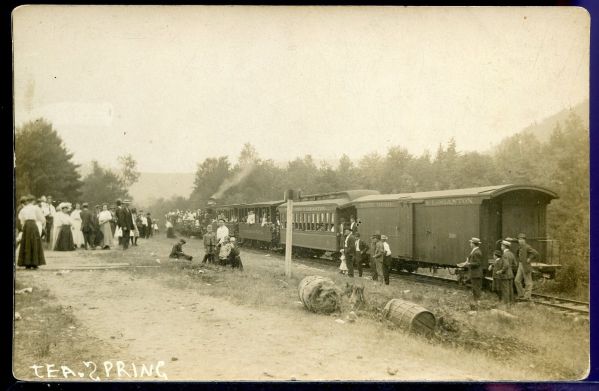 It was here, on April 28, 2018 at 1:00 p.m., that the Sugar Valley Historical Society held their second annual Fun Run.  The participants traveled either a 5K, 10K, or Leisure Lap marked path through the Pennsylvania forest.  The leisure lap is for those who want to slow down and enjoy nature’s beauty but still want to join in the fun for the day.

Suzette Miller, Tina Hawksworth, and Joel Strouse, who are pictured below, again helped to organize the event.  We "Thank You" for all your hard work and efforts. 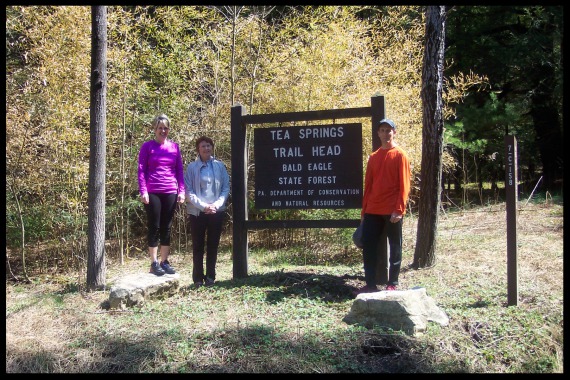 We wish to thank all the participants and hope they met their goals.

Especially, "Thank You" to the Sugar Valley Rescue Squad for standing by.

Each participant and volunteer were given a clear drinking glass with white etched lettering.  Etched art work is pictured below: 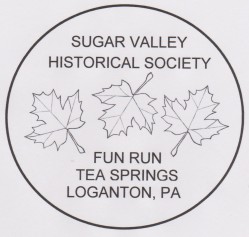