Old-Fashioned Christmas 2021 will be held in early December.  Date and time to be announced. 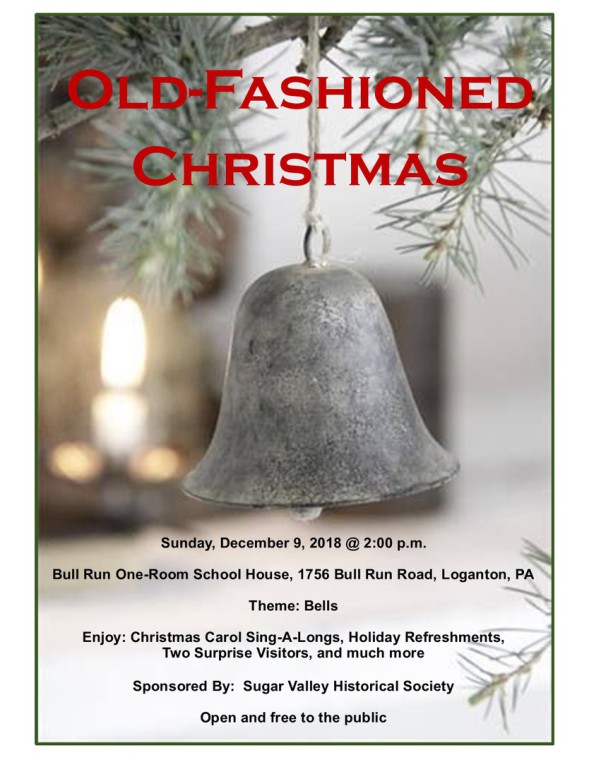 The Annual Old-Fashioned Christmas was held on Sunday afternoon December 9, 2018 at the one-room Bull Run School two miles southwest of Loganton.  It was sponsored by the Sugar Valley Historical Society.

Jane Rossman, Secretary, explained that this year’s Christmas theme was “Bells.”  Bells surround us in our everyday life.  There are sleigh bells, cow bells, church bells, door bells, wedding bells, school bells, just to mention a few.  There exists a legend that at the very moment when Jesus was born, all the bells in the village of Bethlehem sounded at one time.  For today’s celebration, we have the school bell, bell shaped cookies, bell pretzels, bell decorations, bell stories, bell jokes, and bell songs.  And in conjunction with the preservation of American history and the mission of the Sugar Valley Historical Society, we will be sharing some history of the bell songs that we will be singing during today’s program.

Anthony Rishel, Vice-President, offered the prayer as we celebrated this joyous holiday season.

Grady Leiter, President, stood up and told a joke.  Knock, knock.  Everyone replied: Who’s there?  Grady said:  Santa.  Everyone replied:  Santa who?  Grady said:  Santa Claus.  Then John Carey, Trustee, rang the one-room school bell, and Santa dashed through the door with a big: Ho, Ho, Ho.  He walked to the front of the school house and sat there right in front of a group of children.  They behaved very well throughout the program.

Next, Yvonne Weaver, Trustee, read a story entitled, “Jingle’s Bell.”  It was about a little angel named Jingle who very much wanted to be in God’s choir.  He played the handbell.  But his bell broke.  God told him he would fix it, but the only thing he did was put a gold string on it.  God told Jingle that when he would ring the bell, it would make the most beautiful sound in the concert ~ just wait and see.  And so, it happened.  When it was Jingle’s turn to play, the sweetest, purest sound came from his tiny crushed bell.  And that is how we have the Jingle Bell today, named after the little angel Jingle who had such great trust in God.  Yvonne concluded, this Christmas, when you hear Jingle Bells, remember the little angel Jingle, who trusted in God and knew God would never let him down.

Before the audience sang each song during the program, as Vonnie Mark played the piano, Helen Imes, Treasurer, gave some history of the song.  We sang "Silver Bells" first.  It was written and recorded in 1950.  This song's inspiration has conflicting reports. Some say that the song's inspiration came from the bells used by sidewalk Santa Clauses and Salvation Army solicitors on New York City street corners. Others say that the song was inspired by a bell that sat on an office desk shared by the composers.  "Silver Bells" started out as "Tinkle Bells." One composer said, "We never thought that tinkle had a double meaning until the other composer went home and his wife said, “Are you out of your mind? Do you know what the word tinkle is?'" The word is slang for urination.

Grady stood up and told another joke:  What do you get if you cross a bell with a skunk?  His reply:  Jingle Smells!

The Daisies and Brownies lined up front and sang “Jingle Bells” while they rang bells.  Helen gave a brief history of the song:  “Jingle Bells” was composed in Medford, Massachusetts in 1850.  It was published under the title "One Horse Open Sleigh" in the autumn of 1857.  It tells of the sleigh races held on Salem Street in the early 1800s.

It was time for another joke by Grady:  What’s the name of the one horse in “Jingle Bells”?

Jane read the following poem entitled:  Can You Hear The Jingle Of The Bell?

Can you hear the jingle of the bell

On a star-filled, winter night?

While the land is full of slumber

And all are tucked in tight.

For if you hear that peace-filled bell,

Perhaps it’s meant for you;

The next sing-a-long was: “I Heard The Bells on Christmas Day.”  Helen offered some history:  Henry Wadsworth Longfellow was a famous poet.  He was filled with sorrow at the tragic death of his wife in a fire in 1861.  The Civil War broke out the same year and his son enlisted.  Two years later, Longfellow was again saddened to learn that his own son had been seriously wounded in the Army of the Potomac.  Sitting down to his desk, one Christmas Day, he heard the church bells ringing. It was in this setting that Longfellow wrote the lines.

Next, the audience shared some personal memories and traditional stories.  One short story that comes to mind was told by Janine Long:  Her Father, William Scaff, had told her that when he was growing up his family would hang up their stockings (personal socks because they could not afford decorative stockings) and Santa would fill them Christmas night.  He got the bright idea to cut a hole in the bottom of his sock and put his boot underneath his sock.  Santa would continue to fill the sock until it was filled, and he thought everything would drop into his boot and he would receive more.  To his surprise on Christmas morning, his sock was darned, and the boot was not full.

The Daisies and Brownies once again lined up front and recited the poem:  “Five Little Bells.”

The first one said, ring he slow.

The second one said, ring me fast.

The third one said, ring me last.

The fifth one said, ring us all at one time!

The last song the audience was: “Jingle Bell Rock.”  Helen offered some history:  It is an American popular Christmas song written by two Americans, Joseph Beal and James Boothe.  It was first released by Bobby Helms in 1957.  It has received frequent airplay in the United States during every Christmas season since then.

What is a Belsnickel?  Anthony gave us the definition:  Over 200 years ago when German settlers arrived in Pennsylvania, they brought the Belsnickel tradition with them.  The Belsnickel is a character who visits homes prior to Christmas to check up on the behavior of the children.  He shows up 1 to 2 weeks before Christmas and often creates fright because he always knows exactly which of the children misbehave.  He raps on the door or window with his stick to leave you know he is near.  He is dressed in hides and fur from animals.  He often wears torn, tattered, and dirty clothes.  He carries a stick to make sure naughty children behave.  He also carries nuts and candy to hand out to the good children.  He is the old-fashioned Santa Claus.

Grady’s spurted out another joke:  Knock, Knock.  Who’s There?  Bel.  Bel who?  The Belsnickel.

John rang the school bell once again and the Belsnickel could be seen rapping on the school house windows, then he appeared through the door.  He walked around giving out candy and nuts.  He finally made his way up front to where Santa Claus sat, and they greeted each other as you can see from the picture. 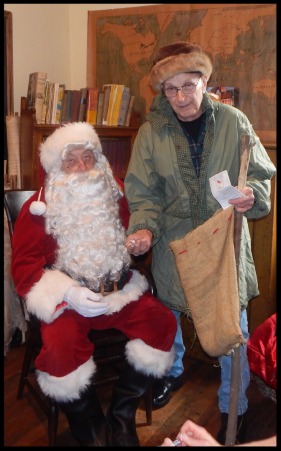 Santa Claus and the Belsnickel

Ring them loud and clear,

To tell the children everywhere

That Christmastime is here!

And everyone rang the bells that they were given as a keepsake.

Chuck concluded the afternoon thanking everyone for celebrating with us and invited the children to visit with Santa.  Lastly, he wished everyone a Happy Jingle Bell Holiday.

To all you readers:  The Sugar Valley Historical Society extends to you a “Happy Jingle Bell Holiday.” 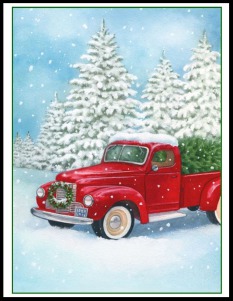 The annual Old-Fashioned Christmas was held in the  one-room Bull Run Schoolhouse on December 10, 2017 at two o'clock in the afternoon.

This year everyone was welcomed by a Christmas tree theme for the gathering. 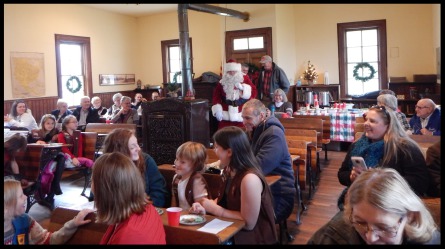 Santa was summoned when some of the children  pulled on the rope to ring the school bell. 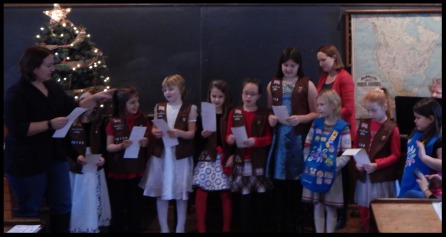 The Daisy and Brownie troops from the Sugar Valley area sang two Christmas songs for the audience. 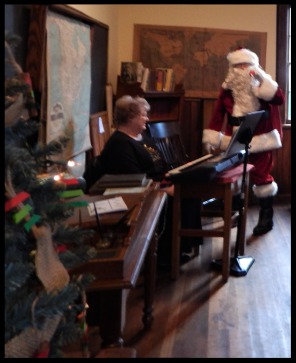 Christmas song books were distributed.  Vonnie Mark played the piano.  She is pictured here with Santa.  The audience enjoyed singing:

Up On The Housetop,

Away In A Manager, 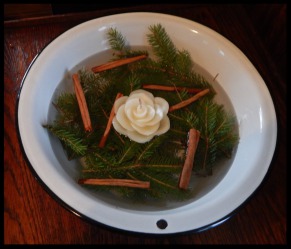 Memories and traditional stories were told. 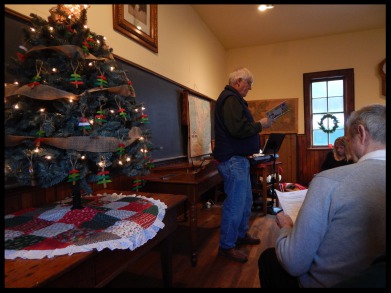 Sugar Valley Historical Society Vice-President Anthony Rishel read a favorite story:  The Night Before Christmas to the young and old. 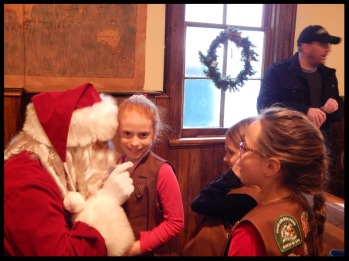 At the end of the program, the children lined up to visit with Santa and receive a tree gift bag full of candy and a tree craft. 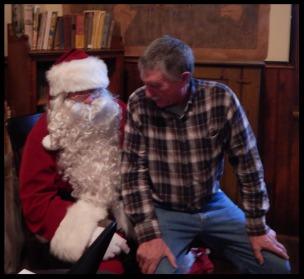 Even Sugar Valley Historical Society President Grady Leiter sat on Santa's lap and told him what he wanted for Christmas. 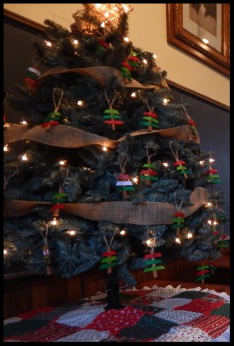 The adults were invited to pick a homemade cinnamon tree ornament from the Christmas tree.